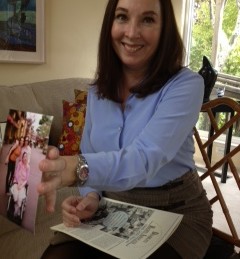 What made you interested in disability rights work? My daughter, who was born with a disability, was bused to a segregated school an hour away because Walnut Creek, CA didn’t “do disability.” When I went to meetings to fight for her armed with federal education laws, school officials wrote me off, saying “We’re the professionals. You’re just a mom.” Those were fighting words. I became a caregiver by day and a law student by night.

Why DRA? After law school I knew I wanted to work at DRA. I told Sid I wanted to sue the largest school district in Contra Costa County on behalf of its 5,000 school children with disabilities. He said if I could get a fellowship, I was hired. I got a fellowship, I was hired, and we won! I was a wet-behind-the-ears lawyer and we won a landmark case with a national impact, resulting in architectural accessibility and policy reform in all 55 schools in the district.

What are you working on now? I started my own firm and replicated that case all over, making over 100 schools permanently accessible. Now the right to attend school is well-established, but too often kids with disabilities are labeled disruptive and they’re suspended and expelled at the drop of a hat.