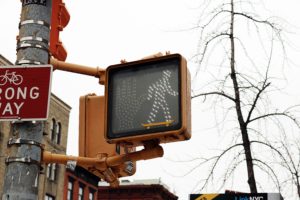 New York City, NY – June 27, 2018 – Disability Rights Advocates (“DRA”), on behalf of the American Council of the Blind of New York (“ACBNY”) and two individual plaintiffs, filed a landmark class action lawsuit today against the New York City Department of Transportation. According to the suit, New York City violates federal law by failing to systematically implement audible and tactile pedestrian signals that would make its pedestrian routes equally usable, and safer, for people who are blind, deaf-blind, or low-vision. The complaint is available at the bottom of this page.

“Cities like San Antonio, Seattle, and Los Angeles have already committed to using accessible pedestrian signals whenever they install new signals or replace old ones.  Installing APS at only 0.59% of its intersections per year is monumentally neglectful of New York,” said Christina Brandt-Young, a Senior Staff Attorney at Disability Rights Advocates.

Lori Scharff, President of Plaintiff American Council of the Blind, New York, Inc., explained that “pedestrian safety is an urgent issue for blind and deaf-blind pedestrians, not only for physical health but for independence, and right now New York City is not our friend.  It’s time for New York to step up and do its job.”

Plaintiff Michael Golfo commutes into New York City every day for work.  “There’s no substitute for walking in New York, but my service dog and I constantly have to worry about being hit by cars trying to cross streets without APSs.  New York needs to do better.”

Plaintiff Christina Curry, Executive Director of the Harlem Independent Living Center, identifies as a person who is Deaf and who has vision loss, and said that “because the City won’t provide APSs, I have to strategize around crossing the street.  I wait for other pedestrians to show up so I can cross in packs of people.  If there’s a subway station, I walk downstairs and underground through it to avoid the street traffic.  I get out of buses a stop early or a stop late and walk farther to avoid intersections I can’t use.  I pay for taxis and car services even though it costs more money than walking.  The City has been so careful to plan for sighted people to be safe crossing the streets, but they have ignored people like me.”

Plaintiffs do not seek money damages.  Their goal is to ensure that, with a comprehensive system of APSs, the city’s sidewalks will be safer for pedestrians who are blind, deaf-blind, and low-vision.

Disability Rights Advocates is one of the leading nonprofit disability rights legal centers in the nation.  With offices in Berkeley, California and New York City, DRA’s mission is to advance equal rights for people with all types of disabilities nationwide.  DRA’s work in New York City has resulted in making half of the City’s yellow taxi fleet accessible to wheelchair users, a federal court order requiring the City to make its voting sites accessible, and a victory at trial in a class-action lawsuit challenging New York City’s failure to plan for the needs of persons with disabilities in disasters such as Hurricane Sandy.  More information can be found at www.dralegal.org.

About the American Council of the Blind of New York, Inc. (ABCNY)

American Council of the Blind of New York, Inc., v. The City of New York