After Years of Failed Attempts to Get the San Jose Sharks to Comply with the Americans with Disabilities Act, Blind Fans Resort to Lawsuit 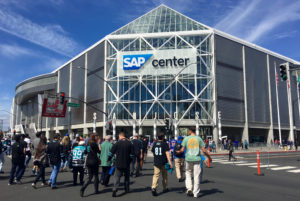 Berkeley, CA (March 26, 2019)—As the San Jose Sharks clinch their fourth-consecutive berth to the Stanley Cup Playoffs, blind hockey fans take aim at the NHL team’s failure to ensure equal access to the digital fan experience. The San Jose Sharks + SAP Center mobile application—a key digital piece of fans’ interaction with the stadium and the team—is ubiquitously inaccessible via the assistive technology, called screen readers, that blind individuals use to access such services. Find a copy of the complaint below.

Marco Salsiccia has been a San Jose Sharks fan ever since the team’s inaugural season in 1991.  When he lost his vision suddenly in 2014, he feared that attending hockey games would no longer be enjoyable, but he found that by going to the SAP Center (called the “Shark Tank” by many fans) with a radio, he could listen to the stadium’s live, no-delay radio feed and follow the game at the same pace as all the other fans in attendance. Unfortunately, as the team started relying more heavily on its mobile application to engage and provide services to fans, Mr. Salsiccia discovered that he was not able to participate in the complete fan experience that sighted fans enjoy.

People who are blind interact with digital content using screen readers—software that converts the app’s digital elements, such as images, text, buttons, links, and headings, into audible synthesized speech or outputs that information on a digital braille display. Currently, the Sharks’ mobile app contains pervasive barriers to individuals who access such features using screen readers.  Because of these barriers, key functions of the Sharks app are virtually unusable for blind fans.

In addition to Sharks content, the San Jose Sharks + SAP Center mobile application provides sighted users services on behalf of the San Jose Barracuda, and city-owned facilities—Solar4America Ice at San Jose and the SAP Center.  All of the app’s services and benefits related to these entities are completely foreclosed from individuals who are blind and use the native iOS screen reader, called VoiceOver, or the native Android screen reader, called TalkBack.

These problems extend far beyond Mr. Salsiccia.  According to census estimates, approximately 1.6% of the population of Alameda, San Francisco, San Mateo, and Santa Clara counties report vision difficulties. With Sharks attendance at the SAP Center averaging over 17,000 per game, and annual ticket sales for 2017-2018 non-sporting events at the SAP Center over 500,000—the inaccessibility of the Sharks + SAP Center app is potentially excluding thousands of Bay Area residents.

Mr. Salsiccia began contacting his season ticket representative to address these barriers in 2016, and over the years has provided multiple, detailed explanations of the barriers that preclude his and other blind users’ access, but to no avail. Mr. Salsiccia said, “after three years of discussing this problem with the Sharks Front Office team, nothing has been done.  I really want the whole Sharks experience to be inclusive, allowing the blind, visually impaired, and fans with other disabilities the opportunity to participate with the Tank as a whole. The Sharks really want us fans to use the app, and the fact that they forgot about the disabled is extremely frustrating. We are fans too, and we should never be afterthoughts.”

As sports teams and arenas increasing rely on mobile apps to allow fans to sell and transfer tickets, present tickets for entrance, order food, navigate stadiums, participate in sweepstakes and much more, they must make these services available to all fans.  Meredith Weaver, staff attorney at Disability Rights Advocates, said “Accessibility and compliance with the ADA has to be a priority when contracting out the creation and maintenance of digital services.  This is not an obligation that goes away just because a third-party vendor was hired to create the Sharks + SAP Center App.”

Disability Rights Advocates (DRA), founded in 1993, is a leading national nonprofit disability rights legal center.  Its mission is to advance equal rights and opportunity for people with all types of disabilities nationwide.  DRA represents people with the full spectrum of disabilities in complex, system-changing, class action cases.  Thanks to DRA’s precedent-setting work, people with disabilities across the country have dramatically improved access to health care, recreation, employment, transportation, education, disaster-preparedness planning, voting and housing. dralegal.org